Zain glanced through the messages of his old school buddies Whatsapp group. Most of his friends had pictures clicked during the ongoing Durga Puja as their Whatsapp status. Some of them had updated Whatsapp status video related to pandal hopping and celebration.

Despite belonging to a different religion, Durga Puja had always held a special place in his life because of his best friends, the twins Samay and Srestha. But the equations changed on a different night of Puja, twelve years back.

The three of them were soon to leave for different cities for higher studies. Zain had been dating Srestha for six months then. Before he got an opportunity to talk to Samay about their relationship, Samay had walked into Srestha hugging Zain on their terrace on that unfortunate night.

Samay had asked Zain to choose between their friendship and his love for Srestha immediately. Zain had picked their friendship at the cost of breaking Srestha’s heart. Zain left his hometown next month with a vow to never return again.

Srestha had been married to Samay’s senior in Engineering college three years back. This year, she had returned back home with a broken spirit and bruised body after months of physical abuse by her husband. Zain had come to know about it through the Whatsapp group.

Even after so many years, he had kept his heart sealed for Srestha. He waited for the day when Samay could display the requisite faith in their friendship to let him take his relationship with Srestha to the next level. Until then, Zain kept the flame of hope alive in his life through his unrequited love for Srestha. 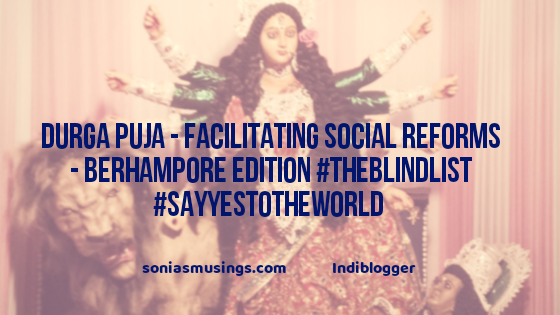 I have often written about how my mothers demise changed my approach towards Durga Puja – the biggest festival for any Bengali. But things changed last year after I realized that I need my toddler to enjoy moments of celebration so that he grows up creating memories. This year, our return trip to my home town and also my husband’s native Berhampore was decided months ago because we wanted the toddler to enjoy puja with his grandparents.

When I decided to go pandal hopping last year, the venue and pandals were predecided evety single day because of my meticulous planning. It wasn’t meant to be any different this year. But like the saying goes, man proposes and God disposes. The toddler who had been unwell for the last one week fell critically ill after reaching Berhampore on Friday. His respiratory infection aggravated so badly that we had to nebulize him. The families were of the opinion that he needed to take rest and might be able to visit pandals only after getting fit which probably meant on the last couple of days of Puja.

Haridasmati impressed me with the Kerala style temple

It was really difficult to see the disappointment on my son’s face. With new clothes meant to be worn on days designated to be enjoyed, it was so painful to see him sit at home. Day before yesterday when his condition improved slightly, I decided to take him on an impromptu visit to few pandals. Some were the famous ones like the Puja at Bhattacharya Para which came into limelight for the 25kgs gold jewelry  gifted by Senco Jewellrs but some took my heart away through the minimalist approach and some impressed my toddler with innovative Asuras (he calls Asura his friend even today) . We ended up covering six pujas before heading back home.

END_OF_DOCUMENT_TOKEN_TO_BE_REPLACED 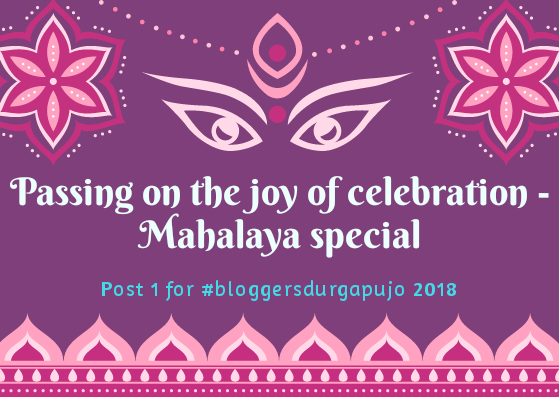 It’s that time of the year again when the wait for the biggest celebration for a Bengali household comes to an end with the arrival of Mahalaya. For the next ten days, all that one can hear a Bengali talk about is how Durga pujo is nothing short of an emotion. It doesn’t matter in which city you are going to celebrate pujo this year. It could be Berhampore/Murshidabad, Kolkata, Delhi, Mumbai, New York or London because the level of excitement always stays the same.

Mahalaya in my childhood meant the beginning of school holidays. Preparation began the night before as Ma pestered me to sleep early while ensuring that Baba kept the radio station sorted out for the wee hours of the morning. Sharp at 4 am, she woke up every year to turn on the radio. I would snuggle up to them with sleepy eyes as Mahishashur Mardini was aired on All India Radio. Birendra Krishna Bhadra chanted the verses of Chandi Kavya/Path while devotional songs played during intervals.

And then Doordarshan came up with a Mahalaya special episode of Mahishashur Mardini. My parents would watch till the end as I dozed off intermittently. Baba would next go to the local sweet shop Mitali and get us Kachori, Aloo Dum and misthi. I still feel those were the only motivating factors for me to wake up so early.

I normally spent the day reading books that I would stack up for the last few months. These were called pujabarshikis because these annual magazines were published only during pujo. For me, Anandamela pujabarshiki meant the world though we also got Shukhtara, Desh, Sananda and Anandalok. This hasn’t changed over the years. Last year I had written a post on how this is a gift from my father that I eagerly wait for every year. This year, I am hoping to get it when I travel to Berhampore this 12th.