I have often written about how my mothers demise changed my approach towards Durga Puja – the biggest festival for any Bengali. But things changed last year after I realized that I need my toddler to enjoy moments of celebration so that he grows up creating memories. This year, our return trip to my home town and also my husband’s native Berhampore was decided months ago because we wanted the toddler to enjoy puja with his grandparents.

When I decided to go pandal hopping last year, the venue and pandals were predecided evety single day because of my meticulous planning. It wasn’t meant to be any different this year. But like the saying goes, man proposes and God disposes. The toddler who had been unwell for the last one week fell critically ill after reaching Berhampore on Friday. His respiratory infection aggravated so badly that we had to nebulize him. The families were of the opinion that he needed to take rest and might be able to visit pandals only after getting fit which probably meant on the last couple of days of Puja.

Haridasmati impressed me with the Kerala style temple

It was really difficult to see the disappointment on my son’s face. With new clothes meant to be worn on days designated to be enjoyed, it was so painful to see him sit at home. Day before yesterday when his condition improved slightly, I decided to take him on an impromptu visit to few pandals. Some were the famous ones like the Puja at Bhattacharya Para which came into limelight for the 25kgs gold jewelry  gifted by Senco Jewellrs but some took my heart away through the minimalist approach and some impressed my toddler with innovative Asuras (he calls Asura his friend even today) . We ended up covering six pujas before heading back home.

Yesterday, we came to my father’s place for Maha Saptami and Maha Ashtami. I was quite sure that the boy needed to take rest the whole day. To my surprise, he kept pestering my Dad to take him out for pandal hopping in this locality. My 70-year-old father gave in without much argument. Three of us from three different generations spent the entire afternoon visiting pandals, some of which were even new to me despite having spent the first eighteen years of my life in this house. Now I know from where I get my love for unplanned and impulsive trips. The fascination for #TheBlindList has been passed on by Dad to me and I guess I have already managed to pass some of the craziness to my son.

We had to give a break to exploring new pandals last night lest he fell sick again. To keep him occupied, I started narrating stories about my childhood experiences of puja pandal hopping with him. We spoke about the grand bhog that is such an essential aspect of puja and that is when something struck me. For years, my father has been closely associated with the pujo opposite to my pre marital home or ‘parar pujo’ as spoken in colloquial Bengali.

The ground floor of our house is given out to the puja committee for the last four days so that they can store the necessary items. Bhog or the food offering in the form of khichudi/khichdi, khyaat/mixed veg, polao, payesh/rice kheer, dum aloo, chutney and some special delicacies are cooked here. The preparations begin two days in advance and it is a sight to watch so many people involved in peeling, chopping and cooking for the grand feast. I decided to open up this new world to him.

When I sat and reflected on what puja is all about, I realized that it was definitely much more than the gorgeous pandals, the glittery decorations and the beautiful clay idols of the Goddesses. One of my closest childhood friends belongs to a different religion than mine yet I vividly remember the couple of years when we cycled to different pandals together. Yesterday she sent me pictures of the pujas she had visited with her daughter while I forwarded her the ones that I had covered with my toddler. And that’s how it has always been. Durga Puja in Bengal is definitely much more than just a religious festival. It actually ends up bringing people of different religions, caste and creed together for a common purpose and celebration. 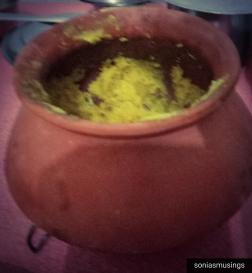 The toddler in his father’s lap amidst lighted up streets

Until a few years ago, transgenders were mistreated when they visited pandals but it was so heartwarming to read about them inaugurating a puja pandal in Kolkata this year. Sindoor khela, a tradition followed by married Hindu women on the last day of pujo is basically about smearing vermillion powder on each other’s forehead as Devi Durga starts her return trip to her heavenly abode. But for the last couple of years there has been voices speaking about inclusion of every female, irrespective of her marital status in this festivity. And if one considers the fact that our puja has no restrictions even on eating non vegetarian food, it won’t be unjustified in saying that here’s a festival that has always been a champion of social change and is continuing to inspire these reforms even today. 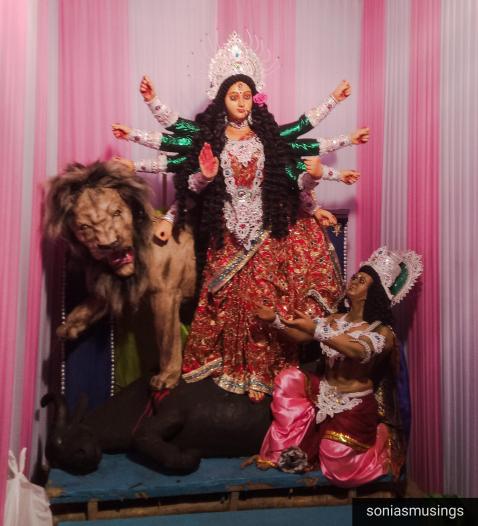 The first year of Durga Puja at UCC

Every year, pandal hopping, eating mouth-watering street foods like phuchka (bengali golgappa) and egg rolls and relishing delectable bhog formed a part of my Bucket list. But my open-minded approach towards the festival this year made me appreciate its lesser acknowledged facets of breaking social taboos. Through #TheBlindList, I discovered how much potential a celebration had in being inclusive and how an army of people could come together to create something so magical and impactful.

We went pandal hopping today afternoon again despite the scorching sun because it is only recently that we have started enjoying travel to explore. But the planner in me has taken a break, so I am not stuck up on when and where to visit anymore. All I know is that this year I’ve learnt the positive effects of taking life as it comes even on a daily basis and I’m enjoying every moment. I have finally learnt to let go of the obsessive need to fulfill my wish list in every scenario and have instead chosen to #SayYesToTheWorld just like the stories of explorers in this video.

This post is also a part of the #bloggersdurgapujo series.