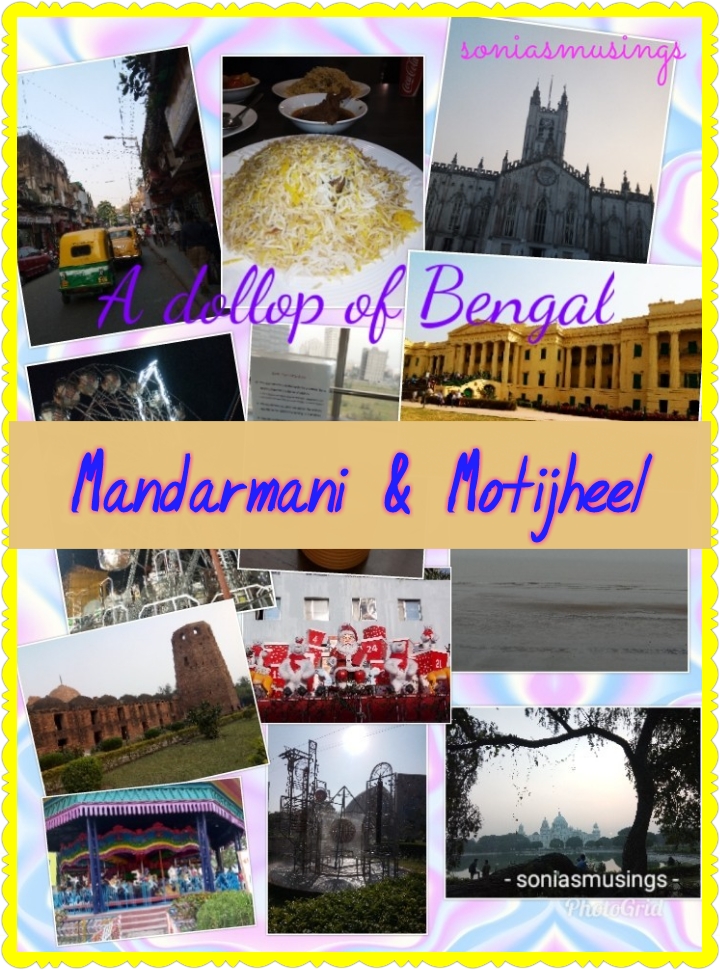 M is for the famous actor Mithun Chakraborty, the mouth-watering delicacy Mishti Doi (sweet curd), the writer and activist who gave voice to the plight of tribal population- Mahashweta Devi, the oldest underground train in Kolkata called Metro and the amusement park near Strand road overlooking Hooghly river in Kolkata – Millennium Park. But through M, let me take you to one of the most favorite beach destinations in the state – Mandarmani and the last site for Murshidabad Diaries – Motijheel.

In the last few years, Mandarmani or Mandarmoni in East Midnapore District has turned out to be one of the largest and fastest developing seaside resort village of West Bengal. Red crabs crawling around the 13 km long beach is a special attraction here. Trying to avoid the much crowded Digha, people have started moving to the more tranquil and serene Mandarmani beach.

The distance between Kolkata and Mandarmani can be covered in 3.5 to 4hours by car (180 kms approximately). Roads are in quite good condition. Train options are available till Contai/Ramnagar/Digha and most of the resorts offer to arrange for a pick up from there. Sher-e-Punjab on the Kolaghat expressway is a great hotel to stop over for breakfast or lunch with aloo paratha being their speciality dish.

While the town has ample options for stay and most of them are on or near the beach, Aqua Marina Drive Inn takes the cake away for being not only right on the beach but having rooms that lets one view the sea from both the room and balcony. For luxury stay, Rose Valley resort and Sana Beach resort are the best options.

Variety of fish items like pomphret, prawns, hilsa etc along with crab dishes are a must try in this place. Most of the resorts have their own restaurants serving local Bengali cuisine that include a large variety of sea food. Tender coconut water is a great thirst quencher in this locality.

Mandarmani can be visited throughout the year. During monsoons,the water level goes very high and waves reach till the walls of the resorts.

Motijheel or Motijhil also known as Company Bagh is a horse-shoe shaped lake created by Nawazish Muhammad Khan, the son-in-law of Nawab Alivardi Khan. He also constructed a precious palatial palace beside this lake called the Sang-i-dalan also known as the Motijheel Palace. It is located at the bend of this lake. It was used as the residence of Nawazish and his wife Ghaseti Begum. The palace was built using black basalt pillars and hence the name that translates to Stone Palace.

Inside the palace there is a huge room having no doors or windows in it and closed on all the four sides. The room is 65 feet long, 23 feet broad with 12 feet high plinth area and 1339 square feet. It is believed that huge quantity of wealth belonging to the Begum had been kept hidden underground and in the room. However every attempt to break open this has resulted in death under strange circumstances.

Kala Masjid – It is situated in the vicinity of the lake. The mosque is rectangular in plan and has is three domed. The mosque rests on several octagonal drums which are devoid of any decoration and the domes are crowned by lotus and kalasha (pot) finials. It also has four octagonal minarets at the four corners which taper upwards and are topped by bulbous kiosks which are supported on slender pillars. The minaret shafts are decorated. The facade is also ornamented. Three arched doorways on the east open to a prayer hall. A copy of the Quran, calligraphed by Nawazish Muhammad Khan himself is also kept preserved inside the mosque. The plinth area of the mosque is 5986 square feet.

Opposite to this masjid on the east banks of the lake used to be an ornamented mosque known as the Raesh Bagh.

The tombs – East of the Kala Masjid are several enclosures which host the tombs of Nawazish Muhammad Khan, his adopted son Ekram-ud-Daula (younger brother of Nawab Siraj ud-Daulah), Ekram’s tutor, Ekram’s nurse and Nawazish Khan’s General, Shumsheree Ali Khan. The tombs of Ekram and Nawazish are made of marble and that of Shumsheree is made of sand stone. The grave of Ekram’s tutor is made of black stone.

Motijheel Park – There is a newly constructed amusement park called Motijheel Park in the immediate vicinity. The park has a light and sound show depicting the history of Murshidabad. It is also a bird watchers paradise for the huge number of migratory birds flocking to this area. Flowers and gardens are well maintained. Battery operated cars are used to carry passengers.

For details related to travel, stay and food in Murshidabad, please visit my post related to Hazarduari Palace here

The first trip to a sea beach in the state with our one year old son was to Mandarmani in 2016. He had only learnt to take baby steps then yet couldn’t contain his excitement on seeing sand and sea. Between then and now, we have completed four trips and Mandarmani has become his favorite holiday destination. The last trip in Dec 2017 turned out to be a memorable and special one for him because it was the first time that he took a vacation with not just his parents but his paternal grandparents and his maternal grandfather.

Motijheel brings the end to Murshidabad Diaries as of now. Hope you enjoyed reading this as much as I enjoyed collating the information to write this piece.

16 thoughts on “A dollop of Bengal – Mandarmani and Motijheel”