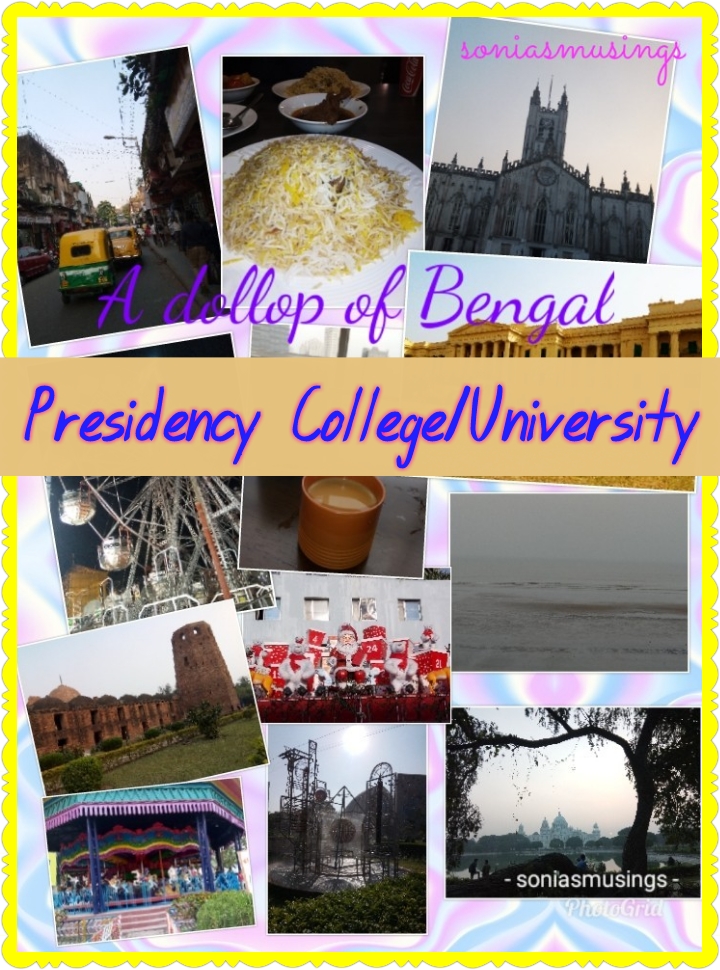 P could have been Park Street – the food lovers paradise in the city, Peter Cat – the restaurant redefining Chelo Kabab, Poila Boisakh – Bengali New Year  celebrated on 15th April this year, Poush Mela – the annual fair marking the beginning of harvest season specially famous in Bolpur, Pranab Mukherjee – the ex President of India and Prasenjit Chatterjee – the fifty something reigning superstar of Bengali cinema. But I decided to feature one of the premier institutes in the country Presidency College – now University in today’s post.

In December 2012, UGC recognized Presidency as an Institution of National Eminence. MOUs for international collaboration with Trinity College, Dublin, Groningen University, Netherlands, and D’Etudes Politiques de Paris (Sciences Po, Paris) were signed. Presidency University’s First Convocation was held on 22 August 2013 and the Foundation Stone for Presidency’s Second Campus at Rajarhat was unveiled by the Chief Minister Mamata Banerjee on 6 February 2014.

The subjects taught at the outset were English, Bengali, Sanskrit, History, Geography, Chronology, Astronomy, Mathematics, Chemistry along with few other science subjects. In addition, Law, Commerce and Engineering were taught for some time which were discontinued later.

While the main building and its stairs have always found a place in the royal backdrop of this university, the Baker Lab in Physics department and Derozio Hall in Chemistry department housed in Derozio building hold equal importance.

The pioneering discoveries of Acharya Jagadish Chandra Bose and Prafulla Chandra Ray in Physics / Plant Physiology and Chemistry respectively were made in the laboratories of the college.  Bankim Chandra Chatterjee and Anandaram Barooah, students of the college, enriched Bengali and Assamese literature. S.N.Bose, M.N.Saha, P.C.Mahalanobish, Amal Kumar Raychaudhuri, Shyamal Sengupta and Ashoke Sen made world-class contribution in the field of basic science. Amartya Sen and Sukhamoy Chakraborty made contributions to economic theory in the decades after independence. The college also boasts of alumni who have served as the President of India – Dr. Rajendra Prasad, the Prime Minister of Pakistan – Muhammad Ali of Bogra and the President of Bangladesh – Abu Sayeed Chowdhury.

The Eden Hindu Hostel started om 1886 as an undergraduate Boys hostel of Presidency College. In order to accommodate postgraduate students and research scholars of Presidency College, this heritage building was extended in 1988. This hostel is one of the largest hostels of this country. Among its many illustrious boarders, the hostel counts the first President of India – Dr Rajendra Prasad. The hostel is divided into six wards and houses close to three hundred boarders.

Presidency University Girls’ Hostel started in 1998 and is located in Salt Lake City. The previous capacity of the hostel was 100 boarders including students of undergraduate and postgraduate classes and research scholars. In order to increase the capacity, the existing building has been extended to include more floors.

1999: An eighteen year old me arrived in Kolkata from a small town to chase my dreams. It didn’t take much to convince my parents that my heart was sold out to Chemistry and there was no point in appearing for the joint entrance examination though that didn’t stop the wagging tongues of ‘well wishers’. Three years spent in this college made a woman out of this naive girl. Not every memory associated with this college is pleasant primarily because it was my first exposure to the real world and the struggles associated with it. While the college in general and Chemistry Department in particular exposed me to academicians and teaching methodologies par excellence, it also taught me how different the life of a hostel student was than that of a day scholar.

Presidency College Girls Hostel or PCGH as it used to be known as then, was the first residence away from home. The first year spent in the dormitory adjusting to the high decibel of Television in the next room and coping up with twelve more girls and their habits was no less than a daily battle for each one of us. The warmth and love of seniors and mentors who held our hands when emotions took over common sense stays fresh in the memory till date. Skills like leadership, compassion and perseverance developed in such an environment. The biggest take away from those three years has been a best friend, a handful of friends, seniors and juniors who still mean the world to me.

Hope you enjoyed the nostalgia coated history today. Hoping to see you tomorrow with a new post.

18 thoughts on “A dollop of Bengal – Presidency College/University”