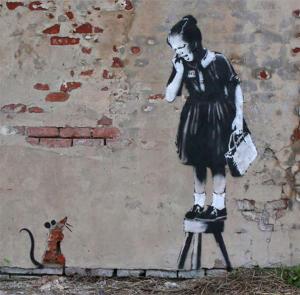 Last afternoon, I was working on my blog trying to brainstorm for the next topic when I  suddenly noticed a small rat run inside the room. The apartment complex, where I reside in Kolkata is getting renovated. It was the turn of our flat to get repainted and repaired this week. Every day I would find some or the other windows/doors kept open by the workers. That would have been the prefect point of entrance for this tiny creature. With my twenty seven month toddler then sleeping on the bed, I had no option but to dial my father who, at that moment was present in the adjacent room. There was no way that I could let my son wake up so fast. Putting him to sleep usually takes more than an hour and I am never willing to let my efforts go waste by waking him up early. After an intense search, we could still not locate it. I couldn’t shake off the entire incident throughout the evening. I am easily intimidated by all insects/animals larger than the cockroach. The moment I spot a lizard somewhere nearby, I scream my heart out. So a rat, despite its tiny statistics is an object of fear for me. I recollected that this was my third encounter with the species, the first being in Delhi.

I was a Post Graduate student at Delhi University. In 2004, I was waiting for the results of my final year exams. Instead of going back home, I decided to stay back in the city and work on a project in the department. As per the rules of my university hostel, I had to vacate my room on completion of the course. So I shifted to one of the DDA(Delhi development authority) apartments in Mukherjee Nagar on rent. A portion of my 2BHK flat was already occupied by a girl and her cousin. My room with attached bathroom was in a separate corner. We were expected to share the hall and kitchen. The room was cozy  enough for a single person. The only issue was that of a broken glass window pane. My broker – Singhji had assured me of getting it repaired within a couple of day. That week went on fine though there were no signs of Singhji or his men. On Sunday night, while I was reading a book under my table lamp, I could feel that something was moving around. In the semi darkness, I was sure that there was a darker object. The moment I turned around, I saw a big rat running towards my packet of biscuits and chocolates. I jumped out of my seat and ran towards the hall shrieking. My flatmates were highly amused by my behavior. Despite their assurance of the rat having left my room, I refused to go in and slept in the hall. Next morning, at the break of dawn I was at Singhji’s office located within the complex. I sat there till he came to pull up the shutters and refused to leave until he managed to find someone for repairing my window pane immediately. My duration in that apartment was for three more months since I moved to Bangalore next. But in that duration, I never opened that window even once. Even if it meant sleeping on a sweat stricken bed in extreme heat, my fear took precedence over any uncomfortable physical.

The next encounter was even more dramatic. In 2005, I had started working in Bangalore. Within a year, I figured out that the only way forward was through a MBA. Living in a P.G. accommodation, it grew difficult to focus on preparations. So I eventually moved out to a 1BHK in Indiranagar. Technically it consisted of one small room, one tinier hall that also doubled up as the kitchen and half a bathroom. The entire set up was that small. But it gave me the liberty to study as per my schedule. After a couple of months stay there, when I returned from office one evening, I found the packet of freshly purchased bread shaking on its own in the kitchen. It took me a while and a lot of courage to figure out that the reason had nothing to do with paranormal activity. Instead, I could spot the tail of the huge black rat that was feasting on my ‘could have been’ evening snack. I ran like Usain Bolt to the other room. When I went upstairs to tell my owner about the issue, he was neither impressed nor willing to help. I realized that this time I had no option but to deal with this on my own. It turned worse that night with continuous heavy downpour and unending power-cuts till morning. It still amazes me to think of that sleepless night bottled up in one room and sharing the apartment with a rat. Next morning, when I mustered the courage to make a trip to the wash basin to brush my teeth, I saw the rat cuddled up inside a water mug near the basin. Immediately, I covered it with a plate and ran outside with the covered mug. I threw the entire set outside. However absurd it may sound now, I actually requested for leave from office to figure out how the entry route of that rat. Once I was convinced that the opening near the bathroom pipe was the culprit, I sealed it with a bottle that stayed on as I moved out next year to a become a B- school hosteler.

Twelve uneventful years later, I encountered the animal again last afternoon. After an eventful hunt for the animal, my father was sure that it had left. My son, awake by then was upset at missing out on the opportunity to meet and greet he baby rat (idurchana as he chose to call it). He kept asking his grandfather about the expected return of the idurchana. A scared mother, an excited toddler and a fatigued grandfather – all thanks to his idurchana were quite a sight by bed time. Lat night, I had decided to keep the night lamp switched. Just when I had finished rocking my boy to sleep, I spotted the rat on top of the curtain stand near our bed. It was almost midnight and I had screamed out so loud on sight of the animal that we had neighbors ring the bell, concerned about our safety.  The perfect face-palm moment for me! Now that I was confirmed of its presence inside my room, there began the hunt for the rat with double zeal. Unsuccessful at locating it yet again, I refused to take any further chances and moved to the other room with my toddler in tow.

This morning I woke up to find my room converted to almost a dumping ground in pursuit of the tiny animal. My father claims to be confident about the rat leaving the room for good. He has not left a single corner in peace. However, knowing my track record of not so pleasant previous encounters with the species, I am unwilling to go with his conviction and take any further chance. While I have temporarily moved back to my room, every two minutes I find myself scanning the room for any untoward movements or sounds. Till now, there’s been no sight of the dreaded object. But whether it has indeed left the room or is still in hiding is for the night to unveil. Until then, I stay guarded – skeptical of the rats existence or absence while my father moves around with the confidence of having successfully driven it away, my husband can’t help repeating his amusement and amazement with my present reactions while my toddler is both anxious and excited about the endless possibilities of the much awaited encounter with the rat tonight.

Disclaimer – The article stems from my personal encounters and phobia of rats. You can read more about this fear from the mentioned link.

4 thoughts on “Rat tales – my not so pleasant encounters with the species!”