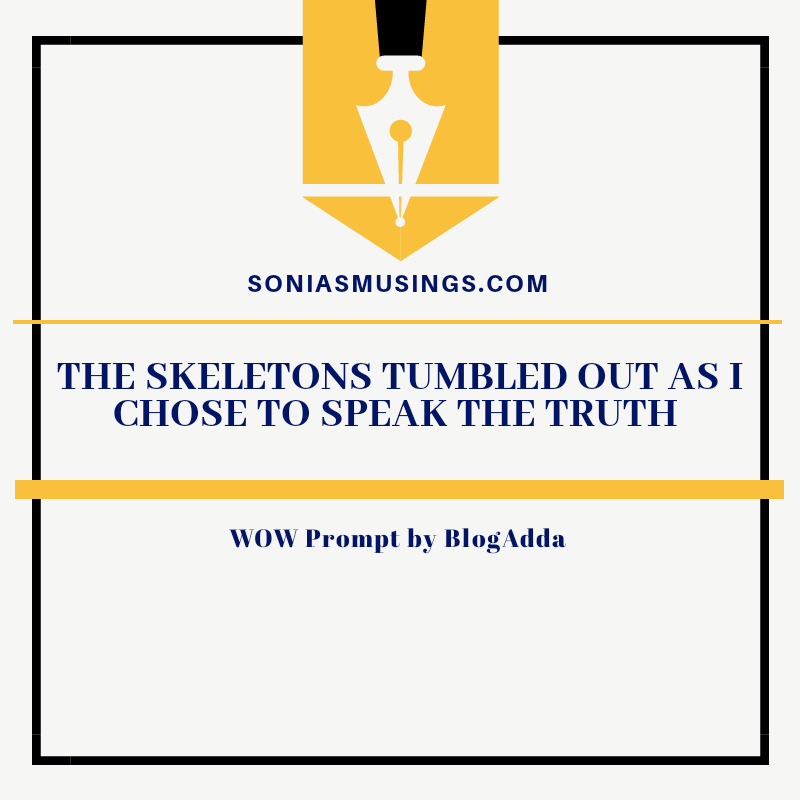 I grew up in a household where speaking the truth was not just encouraged but diligently practiced. Baba always believed that when one speaks the truth, one always stays true to their conscience. Besides the stated facts always stay the same. Ma had the same version personalized when she had asked me to always be the first one to let them know the truth, even if it was something that might leave them appalled. Such principles shaped my nature and character in such a way that I grew extremely close and comfortable with my parents. I knew that I was believed in my house and was one of the strongest factors that built my confidence. The only not so likable attribute that I developed because of speaking the truth was my inability to sugar-coat my words or be diplomatic in my approach.

#MeToo was a movement started last year by Tarana Burke that exposed monsters like Harvey Weinstein. Since then, there have been skeletons tumbling out of closets everywhere. However, it is only recently that this movement gained mass momentum in India after Tanushree Dutta called out Nana Patekar in a decade-old case of harassment. And for the past few days, there have been stories about media personalities, journalists, writers and stand up comics. People like Utsav Chakraborty, Gautam Adhikari, Kiran Nagarkar, Kailash Kher and many others have been called out by women who have faced harassment in their hands. India has finally woken up to #MeTooIndia and #TimeUp movement.

Amidst all this, I realize how pathetic the state of affairs is in our country. Is there any girl who has not faced harassment at any level ever? Right from being groped in crowded buses, receiving unsolicited pictures of private parts, getting masturbated at and being felt up, the list seems to be endless. Beyond a point, every girl has learned to keep her sixth sense in the maximum alert mode and be armed with a device for protection like a pepper spray. Even I have had the most horrible experiences. Most of these abusers were random people whose perverted minds derived pleasure from such sickening acts. But what does one do when this kind of sexual predator lurks in their closest circle!

S has been a family friend for ages. His father had been my Baba’s friend and mentor. Despite the huge age difference, I grew up calling S as Dada (elder brother in Bengali). I had met him many times as a child and always found him to be affectionate and caring towards me. So, I was taken aback when I felt his hands brush my chest area on the pretext of picking up a paper from the table. I was barely thirteen then. But I was so sure that it had happened by mistake that I forgot about it soon. Unfortunately, this started becoming a pattern very soon. I met him during family functions and festivals and each time he made me so uncomfortable that I started avoiding him. The mere sight of him would make me run indoors. Sadly, my parents loved him like their own son and they could never understand my sudden disappearances. The hide and seek game went on for another two years till it was my board exams and I was excused from attending all events until I completed my exams.