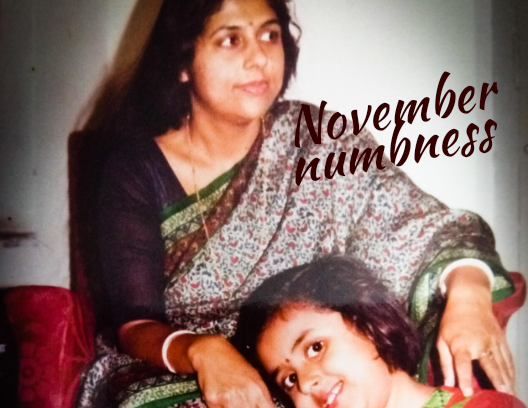 Eight years ago, life was almost picture prefect. I was heading one of India’s leading Pvt Sector Bank branches in Mysore, Tanmoy and I had been married for 5 months after knowing each other for 12 yrs and he had shifted to Mysore by taking a sabbatical from his medical profession to pursue MD.

That year, I had visited Berhampore to celebrate Durga Pujo after ages. Two days at my parents house and two days at my marital home was how we had workedout the schedule and pujo couldn’t have a better arrangement. Ma looked quite fragile but that was justified since she was recovering from weakness due to a low hemoglobin count. A change of place was the need of the hour. So we decided to surprise my parents by booking their tickets to Mysore for Dec’11.

The day we left Berhampore in October, she had been crying nonstop. But she was prone to getting sentimental every time I went back to college or work after a vacation. Little did I know that  her tear stained face trying to act brave for the sake of her daughter was the last time that I would see her. On the night of 11th Nov 2011, she was admitted to a private hospital in Berhampore with complains of pain in the abdomen. She was kept in the ICU as Baba and my marital family ran around trying to figure out what might have happened.

Sitting thousands of kilometers away, Tanmoy, who probably was the only one who understood the gravity of the situation, kept coordinating with the doctors while I was trying to get a car to take us to Bangalore airport the next morning and book the earliest flight to Kolkata. That night, we understood the meaning of ‘fear’ of losing a near one.