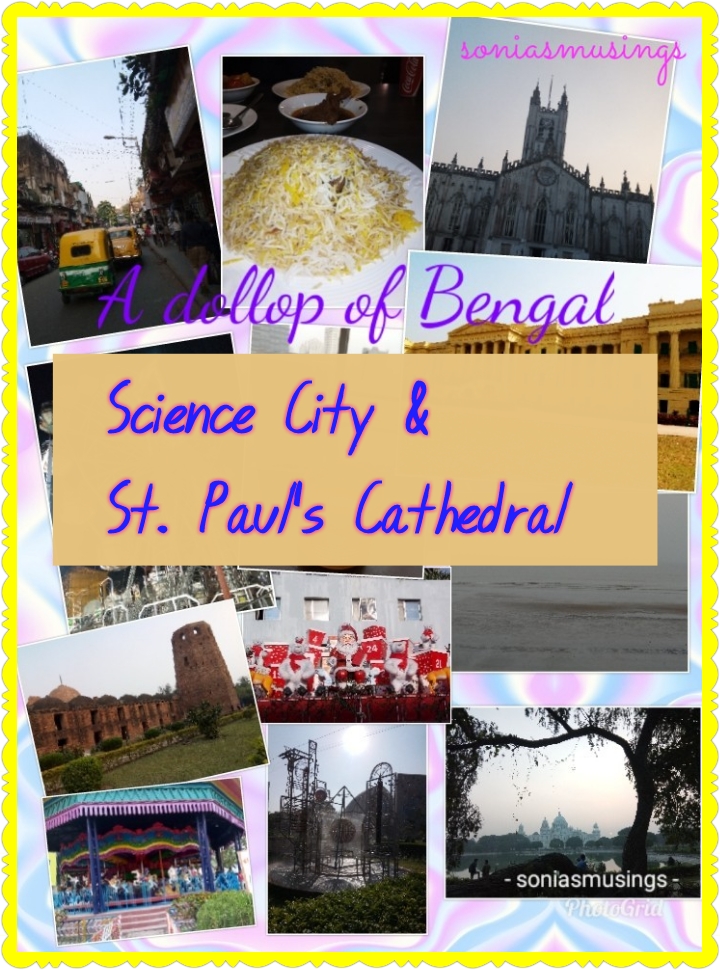 S had such an illustrious list of topics to be written about that it got quite difficult to pick up only one among them. From the cricketing legend Sourav Ganguly to the oscar winning cinema maestro and writer Satyajit Ray, spiritual leader and reformer Swami Vivekananda, revolutionary freedom fighter Subhash Chandra Bose, legendary movie actress Suchitra Sen, national award-winning actor Soumitro Chattopadhyay and one of the favorite tourist destinations Sandesh khali, there seemed to be no end to the options. However, the two subjects that made it to the featured list today are Science City and St. Paul’s Cathedral.

Science City, Kolkata, a unit of the National Council of Science Museums (NCSM), an autonomous body under the Ministry of Culture, Govt. of India and the largest science centre in India was opened on July 01, 1997. It consists of two facilities – the Science Centre and the Convention Centre.

A permanent exhibition on earth is housed in a two-storied hemispherical building that displays the details of the southern hemisphere in the ground floor and northern hemisphere in the first floor. Slicing a huge earth globe at the centre of the hall into 12 segments vertically in each hemisphere, important features of each segment such as physical geography, lands and people, flora and fauna and other dynamic natural phenomenon on earth have been highlighted around the central globe with the modern display technologies such as attractive visuals, interactive multimedia, video walls, panoramic videos, tilting tables, computer kiosks and 3-D effects theatre wearing a special Polaroid spectacle.2

Interactive exhibits on various topics of science encouraging visitors to experience with props and enjoy the underlying scientific principles.

The 5400 square metres building provides an enquiry based learning to the visitors. It has four sections:

There is also a Musical Fountain in the premises and an area marked as the picnic spot.

Science City is open on all days except Holi from 9 am to 8 pm. Tickets are available until 7 pm.

St. Paul’s Cathedral is a CNI (Church of North India) Cathedral of Anglican background in Kolkata noted for its Gothic architecture. It is the seat of the Diocese of Calcutta. The cornerstone was laid in 1839; the building was completed in 1847. It is the largest cathedral in Kolkata and the first Episcopal Church in Asia. It was also the first cathedral built in the overseas territory of the British Empire.

The cathedral’s design, otherwise known as Gothic Revival style includes three stained glass windows and two frescoes in the Florentine Renaissance style. The nave of the cathedral is very long at 247 feet (75 m), and its width is 81 feet (25 m). The nave is fitted with well-crafted wooden pews and chairs. The central spire rises to a height of 201 feet (61 m) and the tower on which it stands is square in shape and was patterned on the lines of the 12th-century Canterbury Cathedral, England. The tower was fitted with five clocks, each of which weighed about three tons.

The cathedral’s interior has a display of many plastic art forms and memorabilia. There is an “episcopal throne” on the southern flank of the altar and a decorative reredo or wall on its back side dated to 1879. It has carvings of episodes related to the life of St. Paul, the Annunciation, the Adoration of the Magi, and the Flight into Egypt. The parish hall within the premises of the cathedral is the venue for holding social functions. The eastern wall in the cathedral has paintings of the life of St. Paul. Also notable is the front, with its sculpture of Bishop Heber in a kneeling posture.The cathedral’s organ, with 41 stops is still in use.

The cathedral complex also has a library situated over the western porch.

Entry to the cathedral is from the north through a large gate made of wrought iron called the Sir William Prentice Memorial Gate. The cathedral is surrounded by a well-tended garden.

Photography is not permitted inside the cathedral without written permission from the Vicar.

Just before Christmas every year, the Cathedral is decorated for the festival and midnight mass. Other than lighting and Christmas tree, the garden also has scenes enacted after the birth of Jesus through statues and decorative items.

Science City fascinated me as a student and the impact has not lessened over the years. While our toddler was too young to decipher the happenings in the science center last year, he had amazing fun while riding on the road rail, watching dinosaurs (they are his current favorite), exploring aqua life and jumping around along with the sound from the musical fountain.

Despite living in the city for so long, the first time that I visited St. Paul’s Cathedral was only during Christmas last year.  The beauty and serenity of the place lingers on even today as I plan to revisit the place very soon.

Hope you enjoyed reading and viewing the places through my pen and lens respectively.